Considering acidifying or capping your slurry store? There is another way on the horizon…

One company that has received a significant share of the Farming Innovation Pathways (FIP) funding is slurry inoculant manufacturer Envirosystems UK Ltd.

Envirosystems has partnered with Myerscough College & University Centre in Lancashire for an 18-month lab-to-field feasibility project, which started in August 2021. The aim of the collaboration is to deliver a unique bacterial approach to mitigating slurry ammonia emissions and enhancing slurry fertiliser value.

Dr David Townsend, head of research at Envirosystems, explains: “We anticipate farmers are going to have to meet certain criteria for reducing ammonia emissions in the near future. But currently solutions are focusing on covering or capping slurry stores, or acidification of slurry. However, while these systems may reduce ammonia emissions in storage, they lead to future knock-on issues.

“Capping of stores will only stop the release of ammonia until the slurry is spread, and while acidification of slurry can lead to reductions in ammonia and other greenhouse emissions, it could also have a detrimental impact on our farming ecosystems and on the health of UK soils.

“We need to consider the immediate, 5-, 10- and 20-year effects of adding acidified slurry on soil organisms, grass yields, watercourses, animal and human health, and the cost and approaches to potentially rectify this. The acknowledgement of this issue by Defra, and the commitment to support £5m worth of research shows there are no readily available or easy fixes,” adds Dr Townsend.

“Our new system aims to utilise the biochemical pathways adopted by several species of bacteria to convert excess ammonium in the slurry, which has the potential to be converted and lost as ammonia gas, into nitrates which are a plant-available source of nitrogen locked in the liquid slurry,” reveals Dr Townsend.

The first six months are laboratory-based feasibility trials, which will be followed by farm-scale testing at Myerscough College. “The slurry stores at Myerscough College are ideal for this type of project as they have two identical stores which hold slurry from the same 200 dairy cows, housed all year at the college,” says Dr Townsend. “The stores also have non-air tight coverings which means we can closely manage the environments in the control and treated stores. The slurries will then be applied to grassland to see what impact it has on the crops.”

Since the launch of SlurryBugs® in 2003, Envirosystems has collaborated with Myerscough College on a number of research projects, including preliminary research on emissions in conjunction with Lancaster University, and a four-year PhD study with Lancaster Environment Centre to determine the impact on soil after spreading treated and untreated slurry. 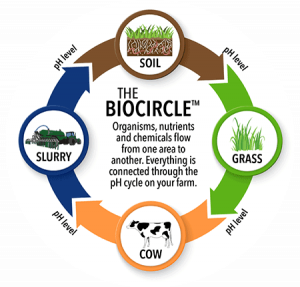 With fertiliser prices at an all-time high, more emphasis is being placed on maximising the value of slurry and utilising it to best effect. The importance of slurry is summarised in Envirosystems’ BioCircle® concept, which values the nutrient economy on farms, emphasising their flow from the soil, through grass or forage into your cow, out into the slurry stores and then back onto the soil again.

“We understand that nutrient losses at any stage of this cycle, through emissions, wastage, or inefficient use usually need replacing at additional cost to the individual farmer,” continues Dr Townsend. “By avoiding excessive nitrogen losses from slurry stores in the form of ammonia emissions, we help to maximise the potential value of slurry, improving resource efficiency and reducing the need for bought in fertilisers.

“These bought-in fertilisers and other synthetic soil additives involve carbon heavy production processes. Therefore, by focussing on the nutrient value of slurry with our new research, we are systematically helping towards net zero by reducing agricultural ammonia emissions, reducing nitrogen deposition, and offsetting the carbon emissions of synthetic fertiliser production.”

Farmers are encouraged to take a sample of their slurry before spreading and send it off for analysis. This ensures they will have an idea of their slurry nutrient value, prior to calculating how much bought-in fertiliser is required – a practice that will lead to huge cost savings this year.

Speaking on the FIP project, Dr Henry Russell, operations director at Envirosystems says their solution will have “clear advantages over alternative strategies, both currently on the market and those recommended by Defra. Harnessing an existing biochemical pathway in slurry will allow wide adoption and application to any farm, regardless of their slurry system,” adds Dr Russell.

“We look forward to proving this technology on farms and then, once the project is completed in early 2023, rolling it out to the wider market.”

A ten-minute presentation on the FIP project will be held at Dairy Tech on Thursday 7th April 2022 at 12.35pm in the Innovation Hub, Environment Session.

This website uses cookies to improve your experience while you navigate through the website. Out of these cookies, the cookies that are categorized as necessary are stored on your browser as they are essential for the working of basic functionalities of the website. We also use third-party cookies that help us analyze and understand how you use this website. These cookies will be stored in your browser only with your consent. You also have the option to opt-out of these cookies. But opting out of some of these cookies may have an effect on your browsing experience.
Necessary Always Enabled
Necessary cookies are absolutely essential for the website to function properly. This category only includes cookies that ensures basic functionalities and security features of the website. These cookies do not store any personal information.
Non-necessary
Any cookies that may not be particularly necessary for the website to function and is used specifically to collect user personal data via analytics, ads, other embedded contents are termed as non-necessary cookies. It is mandatory to procure user consent prior to running these cookies on your website.
SAVE & ACCEPT