The Action Of Cobiotex Explained As Fans In A Football Stadium

Q: How is the surface of a cubicle bed similar to a football stadium?

A: Each of them can be occupied by Blues and Reds at the same time, but in different combinations.

With apologies to supporters of all teams that play in this colour, the red areas in this stadium represent bad bugs (pathogens), including entero-and coliform bacteria (eg, Salmonella, E coli), mastitis bugs and infectious causes of lameness.

Rather than chemicals like lime or organic acid powders and crystals, there is now a biological way to reduce the pathogen load on cubicle beds, in addition of course to keeping beds clean and dry. Metaphorically, this enables you to crowd the stadium with Blue bugs and deprive the Reds of space, nutrients and moisture.

This multi-strain culture of probiotic bacteria is carried in a hyper-absorbent powder and includes the only registered microbiological biocide* in Europe.

This crowding-out effect was demonstrated by a study during the 2019/20 winter on a dairy farm in Staffordshire. The graphic shows a dramatic 15-fold (ie, 1,500%) increase in good bugs present among the cubicle litter. The only change to the bedding routine was a once-a-week, 200g/cubicle dusting of Cobiotex over the rear half of the beds.

Comparing a control (ie, no treatment) period in this 80- cow herd with the following three months of Cobiotex use, there was a 70% reduction in lameness cases needing treatment from 10 to three.

At least in part, this may be explained by a corresponding 90% reduction in the level of bugs classified as Anaerobic Sulphite Reductive organisms. These have been found to be a useful indicator for Treponema, the bugs responsible for Digital Dermatitis, which are not pratical to measure directly on-farm.

While Cobiotex cannot fully prevent Digital Dermatitis, it can reduce the presence of DD-causing bugs and the resulting risk of infection. Another dramatic result in this trial is the near total elimination of Enterobacteria, a group that includes Salmonella and E coli. 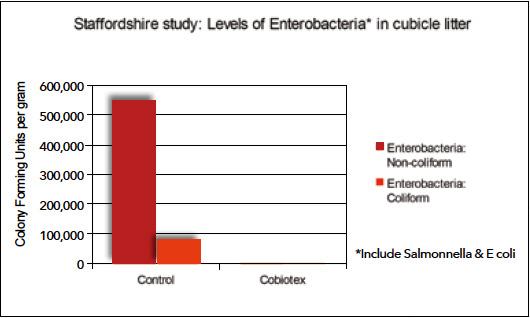 Similarly, a Lancashire farm also saw the annihilation of non-coliform Enterobacteria, and an 80% reduction in coliforms. 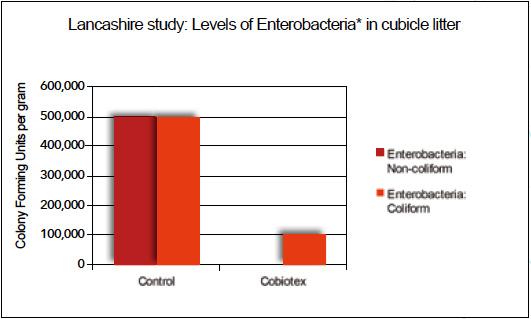 Just as dramatic on levels of good bacteria was the sixfold (ie, 600%) increase in lactic bugs and 25%-plus increase in friendly spore-formers. This crowding out by probiotic Blues of their (and your) foes, the pathogenic Reds, creates an arena in which the probability of bacterial infections is reduced markedly. Clearly, this represents a significant improvement in cubicle hygiene and can be expected to impact mastitis levels or foot infections, for example. 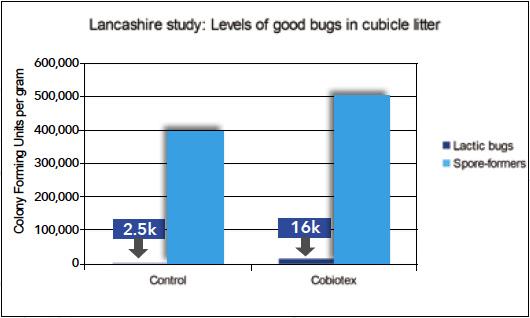 Elsewhere on the farm, this can apply equally in calving pens and calf housing.