Livestock farmers could turn proposed government regulation on ammonia emissions from farms to their advantage if they take the opportunity to address the problem now.

The UK government’s focus on reducing ammonia emissions has been absent from industry news for much of the last 12 months, for understandable reasons. But it certainly hasn’t gone away. And, in the meantime, some aspects of tackling this public health problem present an opportunity for the dairy farming community.

Back in September 2018, AHDB slurry expert David Ball likened ammonia emissions to letting £20 notes float away on the breeze. “Every kilo of ammonia you keep on the farm has potential to save you money,” he said.

Two years on, he suggests that this is where farmers’ main focus should be until development of Defra’s Clean Air Strategy resumes post coronavirus.

In particular, he confirms that low emission slurry spreading is on the increase, especially by farmers using contractors who can justify investment in dribble bar or shallow injection machines. Among low emission technologies, this is endorsed as the ‘number one method’ by a United Nations Economic Commission for Europe task force, according to the UK’s Centre for Ecology & Hydrology.

Covers for slurry stores are another practical measure mentioned in Defra’s 2019 Clean Air Strategy report. This proposes a 2027 deadline for all stores to be covered–but doesn’t offer any qualifying specifications. So when it comes to capital spending, David Ball advises watching out for ‘Best Available Techniques’ for dairy and intensive beef units and, crucially for farm budgets, the possibility of financial assistance.

As a short-term measure, it has been suggested by some—though not by David Ball—that fibre crusts, which form unintentionally on any slurry stores can offer a low-tech method of limiting ammonia losses. Although he notes that this may well be true if undisturbed during storage but cautions that, when agitated to disperse a crust before spreading, ammonia can then escape. 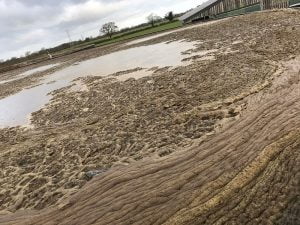 In the meantime, capturing some of his £20 notes is already established practice on a growing number of dairy farms. Through the accurate integration of slurry with bag Nitrogen, an initiative called Slurry-2-Money, for example, from EnviroSystems aims to reduce bought fertiliser by up to 25% in each of years one and two, then 17% in year three, while at the same time maintaining grass yield and quality.

On a dairy unit using 300kg/ ha Nitrogen, the target annual saving by year three is £120/ha based on 34.5% ammonium nitrate at £225/tonne, according to Liz Russell from EnviroSystems. “Savings even higher than this are possible on some farms where bag phosphate or potash can be reduced too,” she adds.

Farm fertiliser savings of £125 per cow

At Paul Cashmore’s Rowley Park Farm near Rugely, Staffordshire, about £10,000 a year— or £125 a cow—is being saved through the planned use of slurry. Mr Cashmore is also one of his contractor’s most valued customers because the slurry pipeline up to a kilometre long and tanker’s trailing shoe hoses hardly ever block up.

The herd was established in 2015 with Holstein Friesians. Since then, Paul follows a Procross programme to breed a three-way hybrid using Holstein, Montbeliarde and Swedish Red genetics. He says this is for strong health traits, big appetites for forage, good feet and low maintenance.

The cornerstone of Rowley Park’s slurry-based grassland productivity is dosing the lagoon weekly with microbiological slurry inoculant. From time to time, Paul sends a sample to EnviroSystems for analysis, enabling accurate applications of Nitrogen, phosphate and potash. 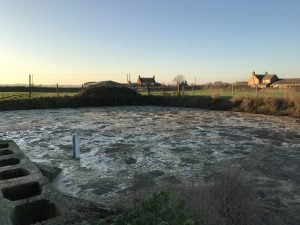 Getting ready for spreading, he says the lagoon only ever needs stirring for a couple of hours at most. Before using slurry bugs, this would take a day or more. Paul also reports that, apart from begins, there is little or no smell.

The likely explanation, according to Liz Russell, involves the inoculant’s bugs using Nitrogen and probably Sulphur too in the slurry as nutrients, capturing them as bacterial biomass that releases Nitrogen gradually into the soil.

“The chemistry of untreated slurry’s unique odour includes ammonia, hydrogen sulphide and skatole, a compound of Carbon, Hydrogen and Nitrogen,” she explains. “Although measuring airborne levels during stirring and any dairy farm’s residents, employees and neighbours can smell and raw slurry.”

This website uses cookies to improve your experience while you navigate through the website. Out of these cookies, the cookies that are categorized as necessary are stored on your browser as they are essential for the working of basic functionalities of the website. We also use third-party cookies that help us analyze and understand how you use this website. These cookies will be stored in your browser only with your consent. You also have the option to opt-out of these cookies. But opting out of some of these cookies may have an effect on your browsing experience.
Necessary Always Enabled
Necessary cookies are absolutely essential for the website to function properly. This category only includes cookies that ensures basic functionalities and security features of the website. These cookies do not store any personal information.
Non-necessary
Any cookies that may not be particularly necessary for the website to function and is used specifically to collect user personal data via analytics, ads, other embedded contents are termed as non-necessary cookies. It is mandatory to procure user consent prior to running these cookies on your website.
SAVE & ACCEPT