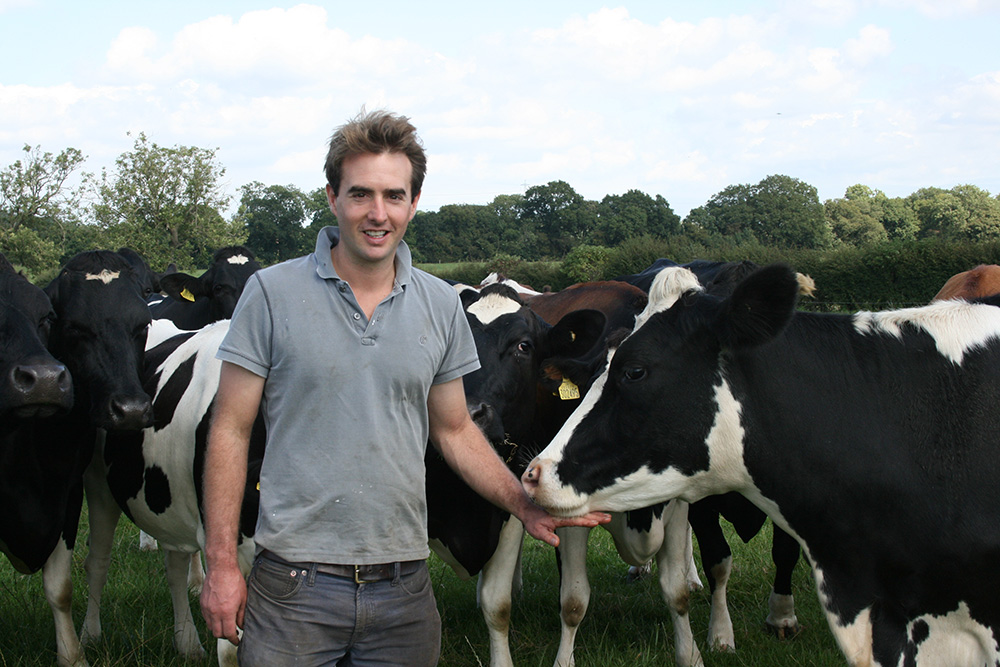 Calving 400 cows in six weeks is no mean feat and it can involve up to 18 calvings a day for the Dugdale family at Crathorne Farms, Yarm in North Yorkshire. It’s a concentrated work-load, but it’s a system that has been the bedrock of the herd’s successful management for over 40 years.

“We run a simple and straightforward system of management that relies on grass and forage and a relatively low level of concentrate feeding. Block calving the herd in this way is part of that and it means we can virtually treat the entire herd as if we were milking just one cow,” says Joe Dugdale.

The calving spread runs from mid-August to early October and means the herd is dry for around six weeks from early July. The system demands high standards of management by the farm’s four full-time staff and two part-time calf rearers.

“Calving in a tight block works well with our late summer grass growth curve. A few years ago we did try calving as a block in the spring but surprisingly we experienced more problems achieving consistent sward heights compared with managing the grass for an autumn calving system.

“We’ve definitely found we have more control over how we make use of the grass in the autumn and that’s a vital part of the system.”

The amount of grazed grass available governs how the herd is managed post calving. Joe Dugdale follows the New Zealand approach to running the herd and measuring how much grass is available to cows has become fundamental to the ethos at Crathorne Farms.

Enough grass means the cows can be outside night and day post calving but once the availability of grazed grass begins to tighten the cows are housed at night.

“The utilisation of grazed grass has become much more important to us as we develop an effective grazing platform. We measure grass weekly and it makes so much sense to do so. Over the years dairy farmers have always been told that monitoring inputs such as feed and fertiliser was critical to profitability, but actually measuring the intake of grazed grass per cow is even more important and yet it has never been prioritised.”

This year, for example, the herd went out by day March 8th compared with April 15th last year and it enabled the Dugdales to save around 90 tonnes of bought-in feed. The herd also produced around 12,000litres more milk over the period.

“The feed value of dry, early spring grass is impressive and underestimated,” says Joe Dugdale.” We are at the beginning of a steep learning curve with a target of producing 4000 litres of milk from forage. In reality we’re actually below 3000 litres.

“We try to mirror the New Zealand approach, both in the way we manage our grazing and in the way we breed our cows,” says Joe who admits he’s looking for a “very robust type of cow”.

“We’re combining Jersey and Friesian genetics and then putting a third cross on to that. We vary the third cross but it can be Norwegian Red or Ayrshire. We’re definitely getting a harder wearing cow and are averaging five lactations.”

But good fertility is rated as one of the biggest advantages of this system. “We only observe bulling by sight only but manage 93% heat detection rate and we don’t have any problems with fertility issues. Our overall conception rate is at 64%.

“If you get fertility right it’s one of the key drivers to profitability. And for our system it’s crucial. The last thing we need is for cows to start drifting out of the block and break up the tight calving pattern.”

Cow rationing is based on a feed input of one tonne of concentrates per cow and about 1.2 tonnes of Trafford Gold. Those are the two bought-in components of the mix – the rest is grass silage and wholecrop.

“We aim to produce a cow’s weight in milk solids over a lactation (around 550kg). Our focus is on production of milk solids because over 90% of our milk price is based on constituents.

“We’re not chasing yield. The aim is to produce milk as economically and as efficiently as we can.” The Dugdale family sells all its milk for cheese making to the Wensleydale Creamery.

But with so many cows calving so quickly – as well as the annual intake of newly calved heifers coming into the herd – the Dugdales are ever conscious of the importance of maintaining herd health through strict hygiene procedures. Cows are milked through a Waikato 36/72 swing over parlour.

The herd uses Envirobed in the cubicles and although there was a period when a sawdust-gypsum based mix was tried the Dugdales found there was an immediate flare-up in cell counts and mastitis rates peaked at 60 cases per 100 cows. They also encountered problems caused by the gypsum-mix sticking to the back of the bed.

“We moved back on to Envirobed which now forms an important part of our hygiene strategy. We have a cubicle sweeper to clean the bedding off the back of the bed and replenish with Envirobed three times a week. When the cows are inside during the winter our cell counts drift between 60 and 80 and the mastitis rate is now at 30 cases per 100 cows.

“My Milkbench report has shown that the cost of the bedding is 0.86p per litre; it’s not a cheap bedding but getting mastitis isn’t cheap either.

“And the slurry management appears to be better when Envirobed is going into the slurry store. It stays in suspension more readily and so we don’t end up with a lagoon that we’ve got to dig out from the bottom.”

The cubicle shed, built following foot and mouth, was designed to achieve a high standard of ventilation and optimise air flow. Wide passages are scraped straight into the lagoon twice a day and the backs of the beds cleaned off as cows are brought in to be milked. The introduction of an automated footbath, used after every milking, has seen the incidence of digital dermatitis virtually disappear.

“We’re constantly evolving the system to ensure that cows are in the best environment and have the best health status we can achieve. From that we believe sustained profitability will follow,” says Joe Dugdale.